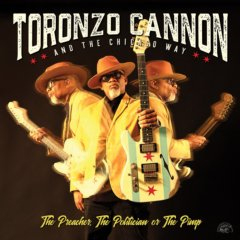 “Cannon is at the front rank of Chicago bluesmen. He creates wide-screen modern arrangements for wry, thoughtful songs, molding a sound that’s both tempestuous and scrupulously controlled.”
–MOJO

Expectation-defying Chicago bluesman Toronzo Cannon will release his second Alligator album, The Preacher, The Politician Or The Pimp on Friday, September 20, 2019. The songwriter, guitarist, vocalist and Chicago Transit Authority bus driver blazes his own visionary blues trail, fusing his original, keenly-detailed tales of everyday life with his muscular guitar playing. Blues Music Magazine says, “Cannon has all the fire and spontaneity of the Chicago legends. His songwriting is a timely and original look at the world he sees by day on a bus and in blues clubs by night, and his assertive voice is the perfect vehicle to deliver the message.”

With the release of The Preacher, The Politician Or The Pimp, Cannon builds upon the foundation he laid with his 2016 Alligator debut, The Chicago Way. The new album, produced by Cannon and Alligator president Bruce Iglauer, features twelve Cannon originals, ranging from wryly sung, slice-of-life songs flavored with a healthy dose of Cannon’s sense of humor to burning social commentary. His gritty, rock-tinged blues guitar work echoes the sounds of the city. His impassioned vocals are filled with muscle and personality. His potent original songs are inspired by his deep Chicago roots, the wisdom of his grandparents and his years of observing the public while driving a bus. “It’s not about the solos,” Cannon says, “It’s about the songs. People get used to everyday life, so it’s easy to miss the things around them. I write about those things. I know the problems of Chicago, the hardship. But I choose to love and respect the city because of the Chicago blues giants that came here from down south. I’m proud to be standing on the shoulders of every great Chicago blues musician who came before me.”

Upon release of The Chicago Way, Cannon burst onto the international stage as one the most electrifying bluesmen to emerge from Chicago in decades. His live performances unfailingly earn him heaps of critical praise and hordes of wildly enthusiastic fans. Cannon has played major cities all over the U.S., Canada, and Europe, including stops in the UK, Germany, Spain, France, Sweden, Switzerland, Italy, Denmark, Finland, Belgium, Poland, and Japan, delighting and surprising audiences with one unforgettable gig after another. He has played the Chicago Blues Festival on ten separate occasions, initially as a sideman, then as a special guest, a sidestage band leader and finally as a main stage headliner. When he’s home, he drives a bus by day and performs by night. Using every vacation day and day off and working four ten-hour shifts a week, Cannon arranges his schedule to gig out of town as much as possible.

Now, with The Preacher, The Politician Or The Pimp, Toronzo Cannon continues to deliver his messages loud and clear. Between his distinctive original songs, endless guitar chops and soulful vocals, Cannon has grown from being a local attraction to become a world-renowned ambassador for Chicago blues. PBS Television’s Chicago Tonight says, “Cannon is just your typical CTA bus driver who moonlights as a sought-after Chicago blues musician. As a guitarist, singer and songwriter, he drives the sound of Chicago blues from the city to blues clubs and festivals around the world.”