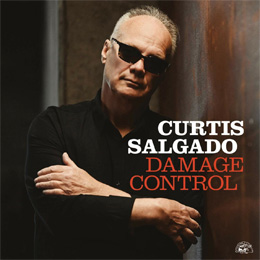 On Monday, December 20, award-winning vocalist and musician Curtis Salgado, the man NPR Music calls “an icon” with “a huge voice,” will launch the emotionally riveting video of Always Say I Love You (At The End Of Your Goodbyes). The original song – a heartfelt, soulful ballad with a moving, universal message of loss and the redemptive power of love – is a featured track on his 2021 Alligator album, Damage Control.

The video – which visually follows the song’s narrative and includes Salgado’s passionate performance – was recorded in Salgado’s hometown of Portland, Oregon in April 2021, and directed by Joshua James Huff. According to Salgado, “The song is about closure. And when someone you know and care about passes on, you might wonder when was the last time you saw them and what were your final words together. Was it something you now regret or something heartfelt and positive? Life is uncertain and finite. That’s why I always try to say, ‘I love you,’ at the end of my goodbyes.”

Alligator founder and president Bruce Iglauer says, “This is one of the most beautiful and moving songs and performances I’ve ever heard, and the video perfectly captures the power and passion of the story and the soulfulness and subtlety of Curtis’ performance.”

Damage Control is being hailed as the best album of Salgado’s long career. Produced by Salgado, Damage Control is packed with soul-searching, street-smart, vividly detailed, instantly memorable songs. With a career spanning more than three decades, Salgado, a six-time winner of the Blues Music Award for Contemporary Soul Blues Male Artist Of The Year (most recently in 2021), is a one-of-a-kind talent whose music is as compelling as his story. From co-fronting The Robert Cray Band to leading his own band (and recording nine solo albums) to helping transform John Belushi into “Joliet” Jake Blues to touring the country with Steve Miller and Santana, he is a true musical giant.