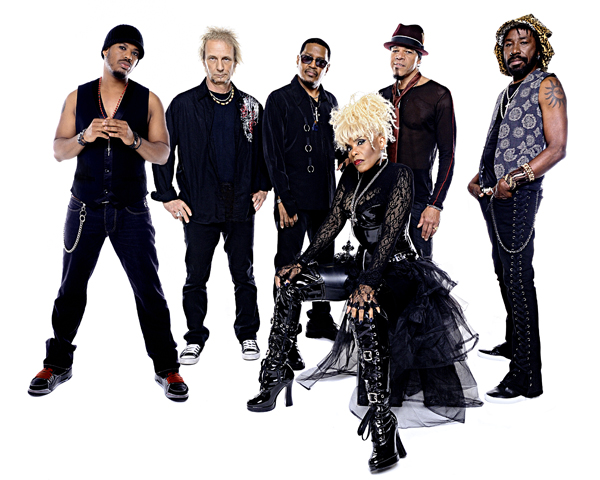 Alex Cooley’s Electric Ballroom was where Tom Werman of Epic records saw Mother’s Finest for the first time in Atlanta Georgia. They went on to record their first of three gold albums ” Another Mother Further, Mother Factor, and Mother’s Finest Live “.

Mother’s Finest are notable partly because they are an “interracial” rock group from the US South. Their music is a blend of funky rhythm, heavy guitars and expressive R&B singing. Their debut album Mother’s Finest from 1976 today is a rare collector’s piece and contained with the ironic song “Nigizz Can’t Sing Rock’n Roll” (although they were criticized for it by an important religious leader and dropped it from their live concerts). In the summer of 1977, they opened for The Who in their laser lit tour through Canada. An unusual choice of opening acts, they impressed with their performance and choreographed stage show. In 1978 they were guests in German broadcast Rockpalast and with one concert they gathered a cult status in Europe which lasts until today (this concert appears on the DVD Mother’s Finest – At Rockpalast).

Georgia funk rock band Mother’s Finest might appear to be only a blip on the radar screen of rock history, but not to any of the headlining bands they’ve stolen shows from — or any of the audiences who saw it happen. Following in the footsteps of the racially-mixed Sly & the Family Stone, Mother’s Finest blended white guitarist Moses Mo and drummer B.B. “Queen” Borden with black vocalists Joyce Kennedy and Glenn Murdock, bassist Wyzard, and keyboardist Mike, for its 1976 self-titled debut album. Tracks like “Rain” and the slightly controversial “Niggazz Can’t Sing Rock & Roll” made enough of a ripple to get the band out of Georgia clubs and into regional touring. The follow-up album Another Mother Further lived up to its title.

For the remainder of the 1970s, Mother’s Finest became the most dangerous opening act in rock, blowing away headliners like Aerosmith, Frank Marino & Mahogany Rush, and Ted Nugent. A subpar third album, 1978’s Mother Factor, took nothing away from the band’s live performances, as vocalists Murdock — and particularly the powerful Kennedy — enthralled audiences over the funk rock backline of Mo, Wizzard, Borden, and Mike. The 1979 album Mother’s Finest Live featured not only original staples like “Watch My Stylin’” and “Give You All the Love,” but also Kennedy singing a stunning cover of Jefferson Airplane’s “Somebody to Love” and the musicians shining on a rearranged version of Steppenwolf’s “Magic Carpet Ride.”

After dabbling in dance music with several different lineups in the 1980s, the trio formed an all-African-American band in the early ’90s by recruiting guitarist John Hayes and drummer Dion Derek. The angry, rocking result was the 1992 CD Black Radio Won’t Play This Record, which proved prophetic despite being the band’s best since its 1979 live album (yet white radio wouldn’t play it either).

In the late seventies they produced more soul-oriented albums and at the beginning of the eighties some heavy rock as on Iron Age. In the nineties they were back with Black radio Won’t Play This Record, a funk metal album, and their most recent CD is Meta-funk’n-physical from 2004 which is more hip hop- and electronic beats-oriented.

It is difficult and often highly dangerous to hang a label on music. Labels can close doors to some of the most exciting talents, and close ears to artist whose fresh vitality demands to be heard. Mother’s Finest is a powerful band, but they are not typical.

The group has created a sound they describe as a fusion of Funk, Rock, Gospel, R&B Metal and Jazz, taken directly from the street to the stage to the studio, that is Afro-Euro Mosaic Soulful and Electric, transcending musical division, and negative stereotyping.

Back in the day, this kind of fusion music was rare to say the least, but the versatility and originality of Mother’s Finest, brought down many barriers.

Known internationally, they are incomparable and unique in their ability to bring it to you in concert. And now after several year’s quiet, they’re still one of the best LIVE bands on the planet.

In today’s world of Multiplicity, and Ethnic diversity, there is a ONENESS in people and music that’s always been in the sound of Mother’s Finest. If you can’t remember the name, remember the initials. MF

To learn more about Mother’s Finest visit their website: www.mothersfinest.com