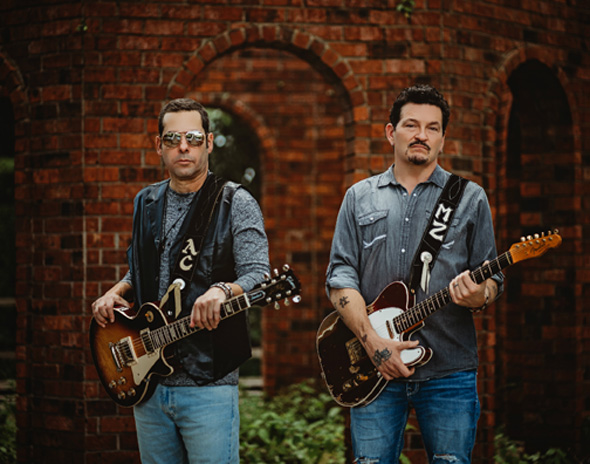 Mike Zito and Albert Castiglia are true “Blood Brothers” in life  and in the music they create both individually and collectively,  joining forces in a collaborative effort of songwriting and  performances to create a total listening experience greater than  the sum of its parts. Added to that process are the talents of  producers Joe Bonamassa and Josh Smith, who brought fresh  ideas to the recording sessions, pushing Mike and Albert  creatively and musically to present their best work to date.

“Mike and Albert have a special chemistry together when they  plug in and play that few have. They finish each other’s  sentences musically,” award-winning guitarist Joe Bonamassa  said about the sessions. “Great tunes, great people, great hang!  What’s not to like? It was an honor to be involved in this  project.”

“Mike Zito and Albert Castiglia have done something special,”  added co-producer Josh Smith. “They have both found their  musical confidante. Most solo artists never even look – let alone  find – theirs. They have brought together a real ‘band’ using  members of each’s solo acts. The sum of all these parts added  with a tremendous effort to both write and perform the strongest record of their respective careers has paid off in a special album. Blood Brothers indeed! Joe and I are proud that these brothers trusted our partnership to produce this special album!”

Mike Zito and Albert Castiglia will be hitting the road again in  support of the new Blood Brothers album. They will bring  together their two powerhouse bands, featuring Matt Johnson:  drums; Ephraim Lowell: drums; Doug Byrkit: bass; and Lewis  Stephens: piano/organ. Both Mike and Albert will be onstage  performing together for the entire show, so fans can enjoy the  amazing chemistry and creativity that these two musicians share  with each other – and the audience. In addition to their own  rock, blues and roots individual tunes, the set will feature a number of songs from the Blood Brothers album.

About Mike Zito and Albert Castiglia

Both Mike Zito and Albert Castiglia are celebrating their most recent albums: Zito’s double live set, Blues for the Southside  (released Feb. 2021), debuted at number one on the Billboard Blues Chart; and Castiglia’s latest solo disc, I Got Love, (released in May, 2022) also charted very high.

Mike Zito won the 2022 Blues Music Award for “Blues Rock  Album;” and Albert Castiglia won the BMA for “Blues Rock  Artist.” With both artists on the exciting Gulf Coast Records  label, it only made sense to join forces and give the fans what  they’ve long been clamoring for: “Blood Brothers.”