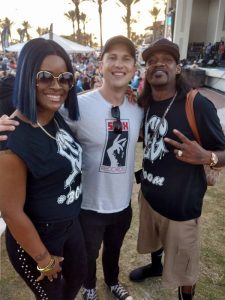 Growing up in South Carolina, Cameron began playing percussion at the early age of 11. With the support of his father who was also a musician, he formed many bands and performed regularly on the local music scene. As he got older, his passion for music stuck with him. While attending Clemson University Cam  became actively involved with the college radio station, WSBF. When the door opened, Cameron seized the title of Production Director where he orchestrated hundreds of concerts and conducted a live session radio show which featured artists from all over the east coast performing on air every Friday night for over two years. As his experience grew, he applied his knowledge of production to co-found the first annual WSBF Spring Festival, which has continued to grow every year since and become a staple in the community. With a firsthand understanding of production and a degree in economics, Cam has combined his love of music and analytical skills to master his roll at Intrepid Artists. Cameron was brought on to assist Rick Booth with supplying the international market’s rapidly increasing demand for bands on the Intrepid Artists roster and has since moved into the role of Southeast Artist Representative where he books extensive tours in the Southeast and Southern Midwest. His territory includes New Mexico, Texas, Oklahoma, Arkansas, Louisiana, Mississippi, Alabama, Florida, Georgia, South Carolina, North Carolina, and Chattanooga.