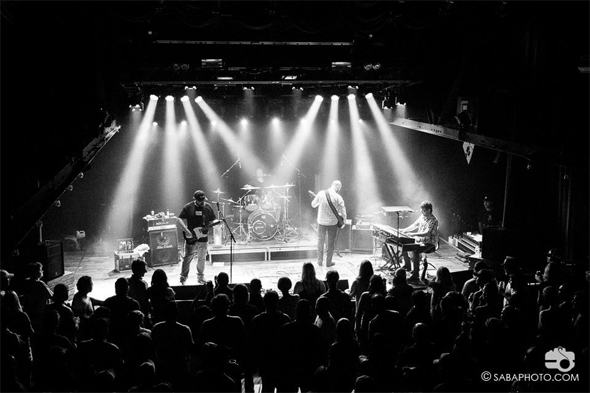 Sweet, lowdown, and introspective, Sam Holt writes rock songs that are heartfelt and poignant expressions of life experiences that reflect his southern roots. Holt is well known for his guitar tech skills for the late Michael Houser of Widespread Panic, and for his own national touring band Outformation.

Sam Holt put his own name front and center with the newly assembled Sam Holt Band, which is anchored by Holt’s distinguished guitar technique – no pick, all thumb! Sam Holt Band brings a hypnotic amalgam of outlaw twang, southern power pop, and face-melting hard rock riff-age. “I really just write from my heart. The music is out there, if I can get out of my own way it’s easier for a song to form,” says Sam.

Born in Nashville, TN, Holt spent his youth surrounded by southern rock. The first bands Sam remembers liking were The Charlie Daniels Band and Elvis Presley. Once his mom brought home KISS Alive II, he knew music would be a major part of his life. Graduating from Middle Tennessee State University with a degree in recording engineering Sam went to work at Soundcheck in Nashville.

In 2000, Holt became the guitar tech for Michael Houser of the wildly popular Athens, GA band Widespread Panic. Houser was impressed with Sam’s skills and told him should be playing his own music. Sadly, Houser passed away in August of 2002 after a courageous struggle with pancreatic cancer. Sam continued to tech for Widespread Panic, and made frequent onstage appearances playing lead guitar on the Summer 2006 tour. These shows were highly valued by Panic’s die-hard fan base. Armed with that experience and Mike’s encouraging words, Sam started the Atlanta, GA based band Outformation with Lee Schwartz on drums and Grady Upchurch on bass. Outformation toured for five years and recorded three albums: Tennessee Before Daylight (2005), Traveler’s Rest (2007) and Fastburn (2009).

In 2010, the members of Outformation went their separate ways. Holt moved to Colorado and became a part of the vibrant Colorado music scene forming The Sam Holt Band with Michael “Spanky” McCluer on bass, Adam Stern on pedal steel and guitar, and Andy Clapp on drums are adding fresh colors and textures to Holt’s catalog of material. Sam notes, “I’m so lucky to have hooked up with these guys. They are such burning players, and I totally trust them in any situation.”

The Sam Holt Band released their debut album, Southern Angels in 2013 which contains Holt’s most honest and accomplished songs to date. The album features guest appearances from Widespread Panic’s John Bell and Danny Hutchens of Bloodkin. The emotional honesty in the lyrics came from experiencing the bittersweet nature of life. “Many events and emotions in the song ‘Southern Angels’ are from my time with Widespread Panic. Having John Bell on this tune is an honor, but also makes perfect sense,” he states.  There are themes of finding positivity in the wake of tragedy running through the record. ‘Fix It Up Man’ co-written with Danny Hutchens addresses this subject. “Danny’s lyrics paint a positive picture of someone who left us too soon. The track is a tribute to someone we both love and miss very much,” reveals Holt.

Last fall Sam moved to Athens, GA and reformed the lineup, which gave him the opportunity to team up on shows with Daniel Hutchens (Bloodkin) and Todd Nance (Widespread Panic), who will join the band on select shows this summer. The new members of the Sam Holt Band feature, Sam Holt on guitar, Adam Grace from Truth & Salvage CO, on keys, Ross Parker on bass, and Jeremy Ward on drums. This is the same line up Sam put together for the highly received “Remembering Mikey” shows. This band will bring the same chemistry to Sam’s original material.  “The journey is the thing, and I’m excited to be on it with these guys,” says Holt.

“Sam’s got that hypnotic thing. He kinda gets into that trance when he plays, and all my favorite guitar players have that ability to somewhat become hypnotized themselves. Mikey Houser and Junior Kimbrough – there was a hypnotic thing, and I think Sam has that. It’s a big part of what drew me to him.”, says Sam’s former Outformation producer and Widespread Panic keyboardist JoJo Hermann. 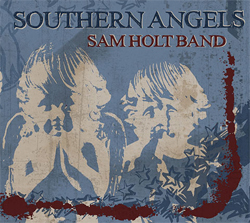