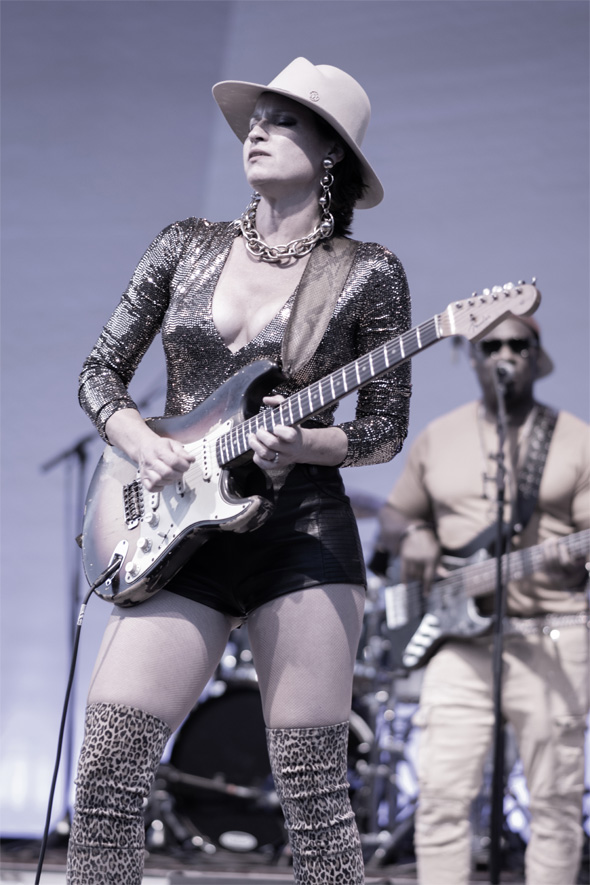 A story about friendship, unity, and determination

Internationally renowned guitarist Ana Popovic has built her career on defining and describing, on her own terms, the essence of American music, simultaneously pushing limits, bending genres, and reinventing her music and herself with each new record.

Not surprisingly, she can claim any number of notable accolades and achievements from the highest quarters of the music industry. She’s shown her commitment to celebrating her guitar-driven, eclectic music style through consistent touring, awards, and recognition for the past 25 years. In the process, she’s emerged as one of the most thoughtful, dynamic, and committed performers in modern songwriting and guitar.

Ana’s new album, Power, due for release on May 5, 2023, on ArtisteXclusive Records, brings those dynamics to the fore and, in the process, turns this set of songs into both a powerful and personal tale of survival through faith, determination and tenacity. They were spawned from a decidedly tricky set of circumstances that tested Ana’s devotion to making music and her perseverance.

“Power” symbolizes unity. Album cover art: two holding hands, black and white, is what this world needs. It’s the power, and it’s the force that’s going to move this world forward. Without that power, there wouldn’t have been so much remarkable music today, ideas, and reforms. And indeed, not this record. This story is about friendship and embracing yourself with everything life throws at you.

Ana recalls, “In the fall of 2020, while the world was dealing with Covid, I found myself in a dire and devastating situation. I was diagnosed with breast cancer. Having lost my mom three years before the same illness, my world just crumbled. My family had just built a beautiful new home in Manhattan Beach, California. But now it seemed that everything we had looked forward to was coming to a crashing halt. “It left me with so many uncertainties. We didn’t know what to do. Should we move back to Europe? Should I abandon my music career and simply stop performing? I didn’t know what choices I had or what path I should take.”Then, her bass player and musical director, Buthel, gave her the support and encouragement she needed. “You can’t retire! You’re born for this,” he told her. “We’ve got work to do. We need to touch people with our music.” “He simply has that gift, Ana says; he can build people up!”

Consequently, between 14 chemotherapy treatments and flights back and forth between L.A. and Amsterdam, where she received her treatments, Ana and Buthel connected on Zoom to write the material that coalesced as the new album. Then scheduled demos, recordings, re-recordings, and live shows with her band took place between her treatments. She never missed a show. “Buthel was there for me, taking care of the band, overseeing the music, even choosing wigs and hats with me, encouraging my new look and our new sound while helping me through every difficult day on the road,” Ana insists. “So needless to say, this record brought my spirit the salvation it needed, and ultimately, the music and my ’64 Fender Stratocaster saved my life. I’m convinced now more than ever that guitars CAN save lives.”

The songs shared on Power testify to her conviction. Recorded with an all-star line-up of topnotch musicians from Detroit, Dallas, and New Orleans, like the powerhouse drummer Chris Coleman (Beck, Chaka Khan, Stevie Wonder), she and Buthel wrote and produced the album, which was then mixed and mastered by multi-talented Grammy Award and Dove Award-winning producer Jeremy Bishop Hicks. The results confirm the emotional investment that allowed each entry to become a testimonial to Ana’s potency and prowess. With her masterful guitar solos, always in the service of the song, ranging from sizzling rock and blues guitar to smooth and sultry jazz licks, her vocals range from electrifying to soulful, Ana and company veer from hard stomping blues to relentless rhythms and searing soulful refrains. “Our sound is so eclectic – it’s a gumbo of rock, blues, gospel, soul, funk. It’s black AND white, like the cover of Power.”

Not surprisingly, then, several songs were spawned from emotions she felt in a profoundly personal way. She describes the relentless drive of “Doin’ This” as an expression of the joy of creating something to make people happy. “In my case, it’s music,” she says. “From the moment a guitar is made in the factory, to the point where I get that instrument, put the band together, arrange the material, record the songs, press it and get it out to the world, we can brighten their day. It feeds my passion and brings me purpose. Chris Coleman’s thunderous drumming brings this track to life, while the backing vocalists add their own touch of gospel and soul. I can’t wait to play this one live.”

The tender ballad “Luv’n Touch” is fueled by that singular and steady assurance. The lyrics sum up the sentiment succinctly: When the load gets heavy, the world seems out of touch, take my hand, and I’ll follow/I need your presence and loving touch. It’s about finding the one person who can provide an anchor, who is there for support even when the burden appears overwhelming. Or as Ana says, “It affirms that relationships can be work, but that one special person is all you need to survive in this troubling and turbulent world.”

The striking and dynamic ‘Queen of The Pack’ is assertive in another way. “My band calls me ‘The Boss Lady,’ and it’s funny to me because I don’t feel that way at all,” Ana maintains. “But fronting a great band — one that has a reputation of being a great band fueled by great players — always needs to live up to that renowned reputation. So, it’s my job to ensure we maintain that high bar. Fronting a band or any group of people can be very demanding. You want to be their friend, but at the same time, you need them to respect you as a leader and a front person. That’s especially true when you’re a woman in a male-dominated world.” Or, as the decidedly pointed lyric insists, crack your whip, you’re the Queen of the pack, lick your wounds and never look back, get your team back on track.

The boldly assertive “Rise Up!” transforms that singular stance into a larger and more universal perspective. Although this riveting anthem may not be an original song, the arrangements were altered to help convey a forceful message about the need for change and bringing justice to those communities that have been underserved and marginalized by society. “Mankind has only come so far, but we still have miles to go,” Ana suggests. “We need to fix what’s left to be fixed. We just have to do better! Don’t stand in the way of progress. Don’t turn a blind eye to injustice and the people that need our love and support. Support inclusiveness and unity. That’s what this song is all about.”

On this record, Ana plays Fender Strats, Gibson Les Paul, D’Angelico jazz guitar, and even classical nylon string guitar. She takes the audience on a voyage from rock riffs to hard stomping blues, to fast, slick, jazzy licks to slide guitar, and more.

Given that forthright approach, it’s little wonder Ana’s music continues to have such an indelible impact. Described as “one helluva guitar player” by Bruce Springsteen and has been nominated for eight Blues Music Awards. She’s appeared on the covers of Vintage Guitar and Guitar Player magazines. Earlier releases, Can You Stand the Heat and Unconditional, were tapped as a “Pick-Of-The-Week” by USA Today and given prominent airplay on NPR. In addition, most of Ana’s albums have climbed to the Top Five of the Billboard Blues Charts and continue to receive regular airplay on radio stations worldwide.

Notably, Ana was the only female guitarist to be included in the 2014-2018 all-star Experience Hendrix tribute, a national tour celebrating the music and legacy of Jimi Hendrix that also included such celebrated participants as Buddy Guy, Eric Johnson, and Kenny Wayne Shepherd, among others.

In addition, she and her six-piece band continue to tour relentlessly, having shared stages with B.B. King, Gary Clark Jr., Jeff Beck, Joe Bonamassa, and many others.

Ana was initially introduced to the blues by her father, a storied musician in Belgrade. She took up guitar as a teenager and formed her first band, Hush, in 1995. She started the Ana Popovic band in 2000 and never stopped touring. She proudly states that she has the best job in the world, and it’s the only job I ever had.” Ana recorded her debut album, also named Hush, in 1999 and subsequently moved to the Netherlands to study jazz guitar and other musical pursuits at the Conservatory of Music. Now affiliated with ArtisteXclusive Records, she claims no less than twelve albums in her storied catalog.

Today she is stronger and more driven than ever before. She wants to inspire people: no matter what life throws at you, pick yourself up and come back twice as strong. She is a mother of two and is enjoying her second hobby – interior design. She’s learning a new instrument – playing drums. Popovic performed 150 shows in 2020, and she’s directing music videos. The “Recipe Is Romance”music video is, more than anything else, a strong message to all women that “you can still feel attractive, you can feel sexy, feel good in your skin, even if you’re still recovering after such life struggles, you can reinvent yourself and find power in that.”

Well positioned among today’s blues elite, Ana’s confidence and credibility continue unabated. “Once I found myself back on my feet, everything instantly crystalized for me,” she reflects. “I was able to embrace myself, reinvent myself, both my appearance and my sound. I’m ready to keep celebrating life through music. That’s where I am now, and happily, I don’t want to look back.” 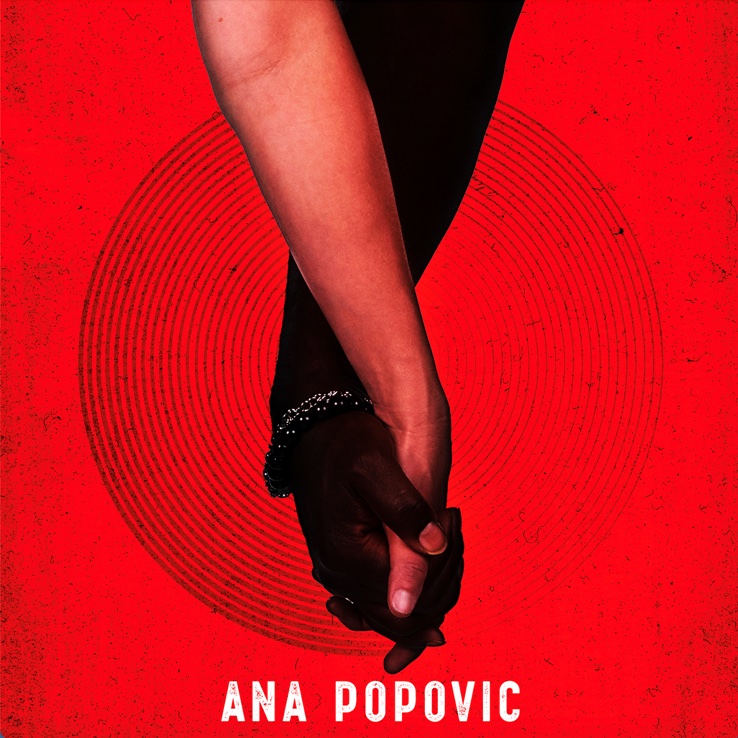 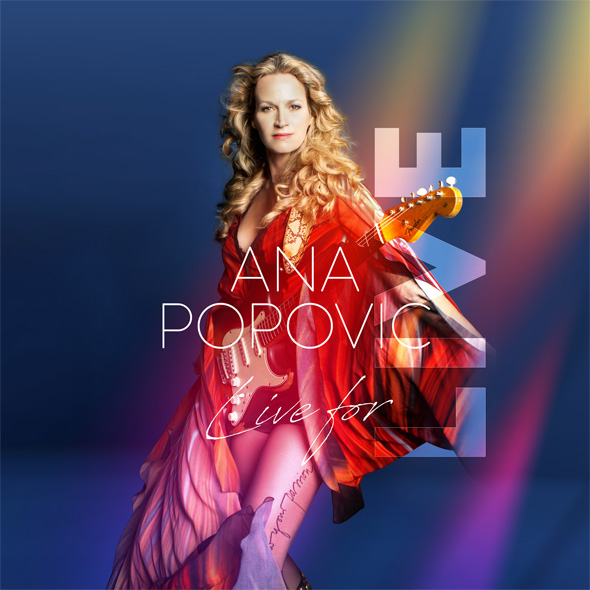 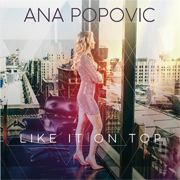 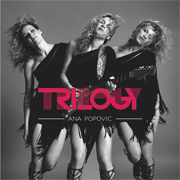 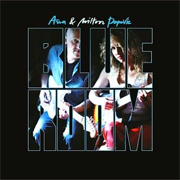 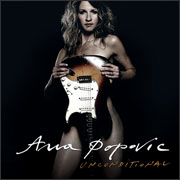 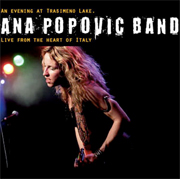 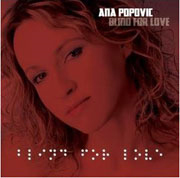 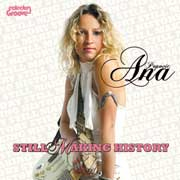 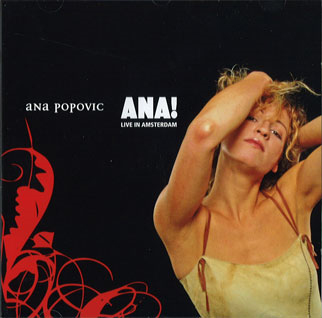 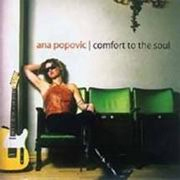 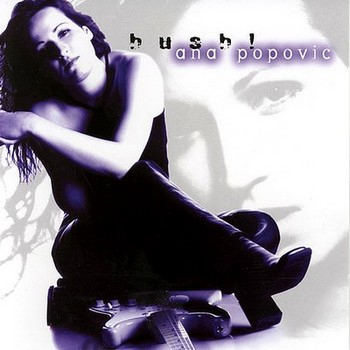 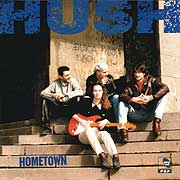